Interpolate uses keyframes you created to fill in the gaps in other frames.

Interpolate allows you to save time annotating. Used well you may only need to annotate every 10th image.

In this example, we have key frames on the left and right with interpolated frames in the middle. In order to interpolate a video that has multiple objects we use a sequence for each object.

The keyframes are the same keyframes created during normal Sequences.

The first run on new frames is expected to be slower.
After that, a single new sequence of up to 50 frames will usually run in a few seconds.

How many key frames do I need

Usually every 3-7 frames.
If the object is stationary for a duration: Set a keyframe when it becomes stationary and a second keyframe the frame prior to it resuming motion.

When should I run interpolation

After annotating at 2 least key frames in at least 1 sequence. In general a sequence usually has at least 3-7 keyframes, so normally it's better to run it after you are done all the expected keyframes in a sequence.

How often should I run interpolation per sequence

Often 1 or 2 runs per sequence is enough.
For faster motion the iterative approach of running it then correcting it may require 2-3+ runs (with edits in between).
You can run it as many times as you like, but it does take some time, and time to go back and review.

Interpolated Icons are displayed in the instance detail with the extra icon: 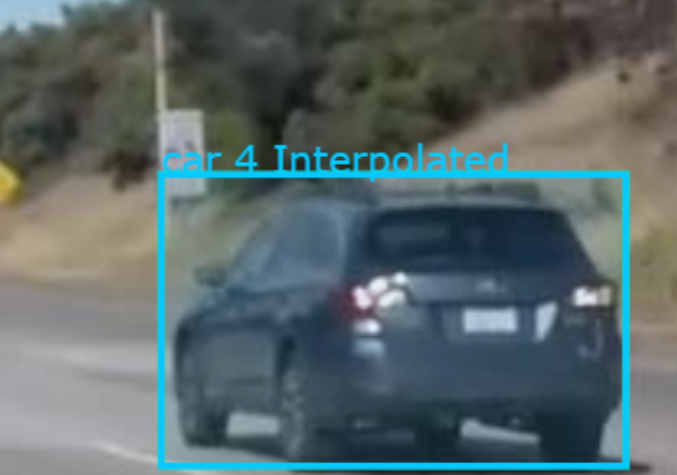 These frames will likely show in keyframe list once saved.

Human edited interpolated frames are promoted to keyframes when edited.

Every time interpolation is run it refreshes the interpolations based on all new data. So changing a single keyframe at the worst point, will improve both frames before and after it.

You can also add more instances to the end of start of a sequence at any time.

A sequence must have at least 2 keyframes. A keyframe in this context is any human created instance.

Interpolate works with video - so your file must be a video to see the interpolate option appear.

Updated over 2 years ago