Exports are a primary means of getting the training data to your deep learning model. Exporting is a part of normal operations.

Exports are generated as a long running operation. Each export is frozen in time. For example if the label is named "Cat" when exported, and then later changed to "Dog", the export will be unaffected. In general the system preserves IDs however, so it's possible to reuse old exports in some cases.

The easiest way to get started is through the UI. Integration options are great for at scale work. Exports created programmatically show up on the UI too, for example a data science team can access the data through the UI for ones offs, without requiring separate coding setup.

From the SDK or API

By default, exports created through the UI default to only completed files.
To export all files uncheck the option in the "more" menu.

Because data is constantly changing, the exports are created on demand. That means by default even a project with say a completed job or completed file etc does not have any exports. A job may be completed, and then corrections are made after the fact, forcing a regeneration of the data. It's entirely up to you when you generate exports.

Exporting an entire directory can create very large files. Besides taking a while to run, this can be ungainly to inspect in normal IDEs. Choosing a job as a source allows you to export batches of work in the same context as a job.

Annotations only and links to raw data.
Note, this document provides examples in JSON. YAML files follow a similar format.

TFRecords is supported for images files only at this time.

Both raw data and encoded meaning (Annotations). It's designed to work with tensorflow.

Work can be exported from: directory , job, or task

The overall file is structured as:

With the remainder of the keys being the actual annotations.

The video/image objects include both a width and height. These are the values corresponding to x/y in the annotations. The annotations are stored with absolute values in relation to the declared width/height. The width height may be a transformation or may the same as the original. The exact file annotated is provided, and may be used with the absolute coordinates.

During computation there is often a desire to transform to relative coordinates, ie so a network can predict a float 0 -> 1. This transformation may happen regardless of whether the original file was transformed by Diffgram. Therefore for ease we always provide the width and height of the file since often different files will have different values even with the same directory.

The label map has a key value pair of label_file_id : name

The key of the dictionary corresponds to the file_id. 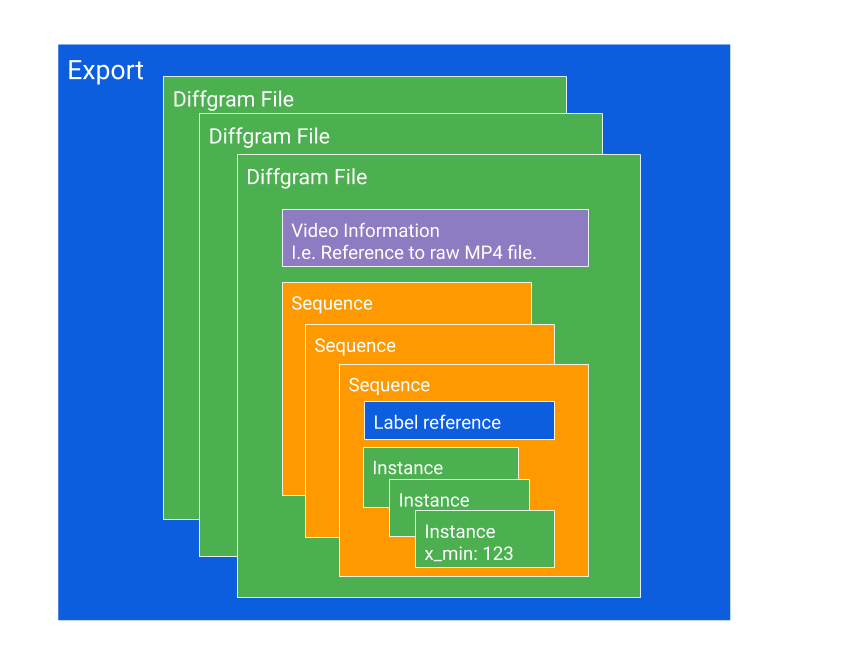 FileFile - Diffgram File. Raw data + Encoded meaning. Examples of raw data include images and video. A file may contain a sequence_list or an instance_list directly depending on the type. > SequenceSequence - A sequence represents a real world object and, for each label, has a number that's unique for each video. A sequence contains Instances. > InstanceInstance - A single example of an annotation. For example type: box. Always relates to a Label and may contain Attributes. An image (or frame in a video) may have many Instances.

For example, each row displayed in the UI here corresponds to a Sequence:

More on how sequences are created.

The mp4_video_signed_url is useful to get the processed video. If for example the frame rate was converted from an original source, then this video will match the frame numbers with no further processing needed.
Otherwise the frame_rate and fps_conversion_ratio can be used to map it to the original file.

The key of the dictionary corresponds to the file_id.

Note the Diffgram File dict only contains "metadata" style information about the file, the entire dict including the file, video, and sequence_list keys together make up the "Diffgram File".

The default expiry of the signed_url is promised to be at least 21 days from date of generation (and may be longer). The expiry is for security because the exported file in conjunction with the raw data link is very sensitive. The grace period is so the file can be reasonably used without having to regenerate.

Applies to Exports generated after Jan 29, 2020

Each sequence includes general information such as the unique id, the label_file_id for that sequence. The label_file_id is the same for the entire sequence, however each instance may have independent attribute groups.

For example a car is a car in frame 0, 2, 5 etc.
However, the car may be occluded in say frame 1, and 3, the occlusion can be represented in an attribute group, per instance (per frame).
If the car transforms into a bus at frame 6, then this could be represented by creating a new bus sequence at frame 6. Although hopefully that's a rare occurrence. :)

File splits are a normal part of annotation. Diffgram offers beta support for handling the splits and/or FPS conversions. Motivations to do splits include more manageable duration for Quality Assurance and easier computation. Some teams handle these splits internally.

This leads to a problem though, if we have a single video split into 10 parts, what does frame 5 in clip 8 mean in relation to the original video?
Given there is also sometimes a desire to reduce the frame rate this can become even more confusing!
Further, you may have some video that's split and some that's not.
This makes what at first may seem like an easy transformation somewhat non trivial to do after the fact.

At least two ways to approach this:

Instances may have a global_frame_number.
The transformation is:

Note, this feature is only available to files added after Jan 16, 2020.

The joint mask is encoded in the image/segmentation/class/encoded
Where for each pixel: